Abstract. Various methods of document alteration with the aim of evidence falsification occur in legal practice, including light exposure, heat exposure, chemical exposure. To detect characteristics of document exposure to heat and/or light, authors of this paper developed method of detection of document artificial aging evidence.

Optical brighteners based on stilbene derivatives [1, с. 296], are used to whiten office paper. Brighteners are added to paper pulp in small amounts (0.01%-0.1%). Molecules of these dyes absorb light in near-UV spectrum range and fluoresce radiating in the range of about 400-500 nm creating the whitening effect making up for radiation in this spectral range that is absorbed by cellulose lignin. Chemical composition and applied bleach concentration varies between different paper manufacturers and even between different batches by same manufacturer. These differences are observed when registering band of fluorescence excited by UV light sources.

When exposing paper surface to shortwave light radiation and heat, dye degradation and fluorescence intensity decrease occurs leading to surface yellowing. Application of artificial aging methods without specialized equipment that provides highly uniform of light or heat field leads to noticeable scatter of fluorescence magnitude of different surface areas of paper sheet. Visual review and/or sheet photography while lighting sheets with near-UV light and point control along with statistical analysis of fluorescence signal of different regions of paper sheet are used to detect such irregularities. To find out whether the documents were subjected to deliberate exposure that can impede dating of handwritten text and stamp impressions, distribution of optical brightener fluorescence signal when excited by UV radiation is researched in vicinity of band peak at 440 nm wavelength (Fig 1). 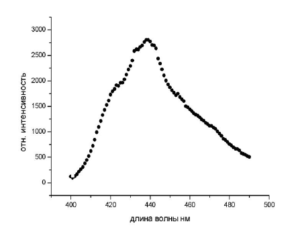 Fluorescence is excited locally on the paper sheet region 4mm in diameter by UV LED T9H28C (SEOUL SEMICONDUCTOR) with a wavelength of 280 nm. Fluorescence radiation is transferred to ZMR-3 monochromator entrance slit through the optic fiber and is gathered from the exit slit to FEU-100 photomultiplier photocathode. Signal of photomultiplier is recorded after the U5-10 dc amplifier. Signal is registered in the points uniformly distributed along sheet reverse side and non-inked regions of a front side of the sheet.

Based on the research results, authors of this paper established the following: