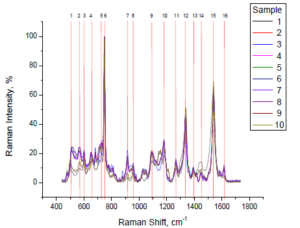 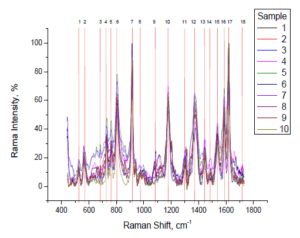 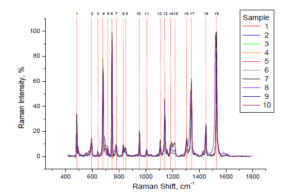 Measurements of characteristic lines relative intensities were conducted using Raman spectroscopy. Raman spectra of handwritten text and stamp impressions were registered in the 440 – 1735 cm-1 range at 532 nm and 895 nm excitation wavelengths. Under these conditions general view of a spectrum is mainly determined by dye content of writing media [1, с. 947-951].

As time passes, dye degrades due to oxidation, hydrolysis and degradation (break up of large molecules into smaller fragment due to photoinitiated redox reactions) [2, с. 133] processes, thus allowing to use ratio of Raman spectra characteristic lines for expert assessment of written inscription date.

Writing media dye types were identified by match between wavenumbers and relative intensities of all the strong (S) and medium (M) lines with data listed in aforementioned tables.

Conducting measurements by this algorithm ensures Raman spectra relative intensities measurement results in the range and with precision criteria listed in table 4 in confidence interval Р = 0,95.

Cutout analysis was conducted using “Chromatec-Crystal” 5000.2 (Russia) gas chromatograph with solid sample injector. Conditions under which the chromatograms were obtained are listed in table 5.

According to results of study of different inks, dependencies of line relative intensities of age of ink application to paper. Every point on the graph is averaged value of corresponding lines ratio from 5 measurements for each sample. Along the X axis time that passed from the moment of ink application on paper base to moment of spectrum recording is plotted in months.

Dependence of characteristic lines intensity ratio on time has a complex nature: it consists of three regions of monotonous variation of spectral properties and two extreme points.

Following results were obtained from research of B type inks with triarylmethane dyes as coloring agents (Fig. 4):

Curve may be divided in three monotonous intervals (Fig. 5), presence of those intervals shows that prevalent processes change, resulting in complex shape of dependence graph of characteristic lines relative intensities on length of time passed since ink application to paper. 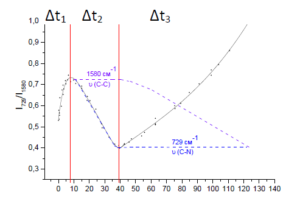 Figure 5. Dependence of 729 cm-1 and 1580 cm-1 characteristic lines relative intensities ratio on age of ink application on paper plotted for type B inks